In the past several years, “brain-hacking” became increasingly popular. Whether it’s using nootropics to boost your mental abilities or listening to white noise to help you fall asleep faster, in the age of fast lifestyles and short attention spans, all we wish for is a quick fix for our problems.

Lately, various sound apps are on the rise. You’ve probably heard about a myriad of binaural, white noise, pink noise and generally – “background noise” apps. The whole theory behind background music apps is built on the assumption that by using specially structured music we can entrain our mental state in our favor (e.g. achieving a calm state of mind).

All over the internet, you can find countless concentration (focus)/relaxation/sleep background music videos, soundtracks and apps. But, amongst them all, Brain.fm certainly stands out.

So, what makes Brain.fm stand out from the crowd?

First of all, Brain.fm isn’t just another binaural beats/background noise app. The whole concept behind the app is a bit more complex than that.

Basically, binaural beats are produced by playing two coherent sounds at slightly different frequencies (e.g 100 Hz and 107 Hz), which the brain then interprets as a “third sound” (7 Hz). The assumption is that the binaural beat will entrain the mental state, so a certain state of mind (in our case deep meditation) will be achieved. 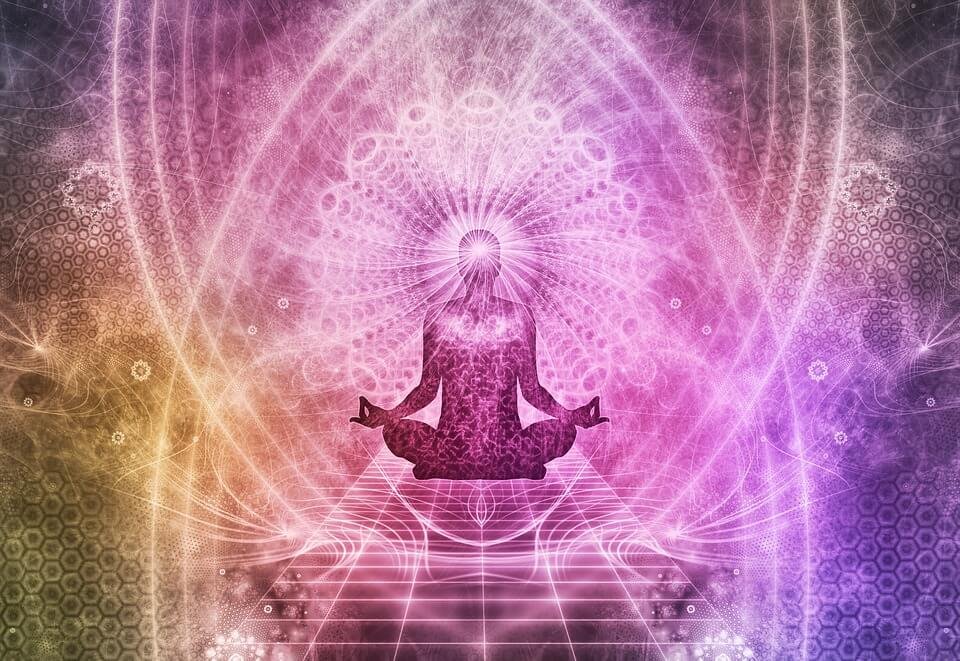 The science behind the “noises” (white/pink/brown) is based on using a spectrum of sound frequencies to block out the background sounds, thus helping you focus, sleep or meditate (depending on frequencies). People behind the Brain.fm app dug a little deeper than that.

As we all know it, sounds and music captivate our attention. Whether it’s a bird chirping on the tree, or a song that makes us sing (or cry) our heart out – it will grab your attention. Well, people from Brain.fm have found a way to utilize that feature by using music and neuroscience. 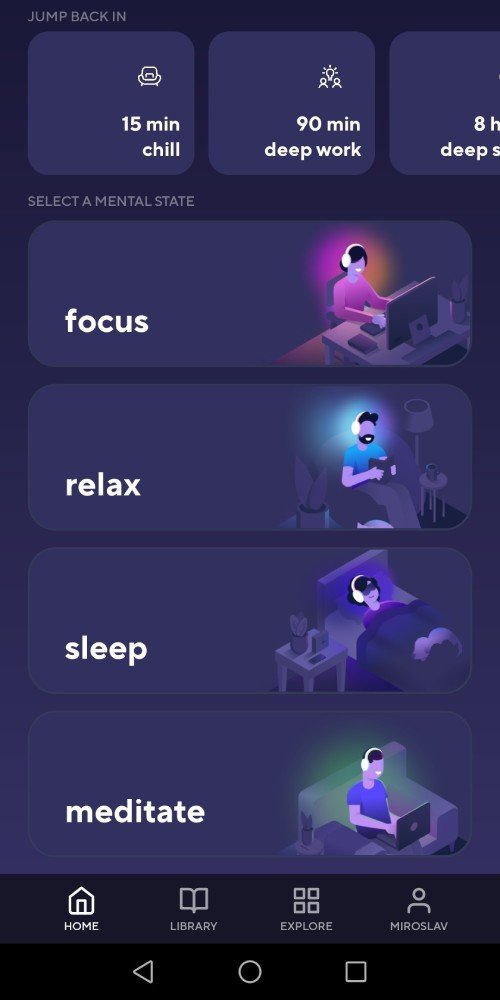 Brain.fm theory relies on sounds modifying ongoing neural oscillations to improve our cognitive performance. They are delivering carefully composed music that incorporates rapid amplitude modulations which alter neural oscillations. Tracks that are produced are ongoing, lasting for several hours at a time. Songs aren’t too distracting to a listener (no lyrics, no sudden bursts of loud sounds), yet are gently engaging (which helps in reducing mental chatter).

In the beginning, music was composed by one person. Composing a precise music piece, that lasts for at least an hour – lasted for months. When they realized that wasn’t sustainable, they turned to new technologies – artificial intelligence. Now, a team of musicians composes the sample tracks, AI arranges them and adds the acoustic elements (amplitude modulations) that make the tracks what they are. Tracks are then assessed by human listeners, refined or discarded if needed.

Brain.fm has a user-friendly and visually pleasing interface. You can use it on your computer and on your smartphone. Easy to navigate, with useful advice for beginners – it’s quite compelling.

When you enter the app, it offers you five different “mental states” to choose: focus, relax and sleep. After choosing the mental state you desire to achieve and the time period in which you want to achieve it, the app starts playing your track.

It will remind you to listen to it through your headphones for the best effect, because of the 3D audio techniques they use. Depending on the mental state you chose, you can choose the type of tracks you want to listen to by clicking on “more music”. Brain.fm will offer you a great variety of music samples – piano sounds, rain, forest, underwater etc. Even if you like the music sample, but don’t feel the track that is playing – just skip it, and find the one that suits you best.

When registered, you are provided with five free sessions. If you like the app, you can buy a monthly, trimonthly or yearly subscription to a pro plan. Pro plan has additional features such as offline and unlimited sessions.

Brain.fm comes as a web-app and mobile app. While webapp is ideal for getting work done using Focus mode, mobile app is more suited for Relax and Sleep modes as it offers, well…better mobility and comfort.

Bonus tip: If focus is what you desire, the best results are achieved in combination with Pomodoro technique. Basically, you work in a 25-30 minute blocks and then take a short break.  Check out PomoFocus app here – it’s free to use!

Brain.fm isn’t really for everyone, but if you work from home (as many people do right now) or suffer from chronic procrastination, the Focus mode is one of the best things you could do to become more productive. That’s how it’s used by most users, even though Relax and Sleep modes are nothing to sneeze at. 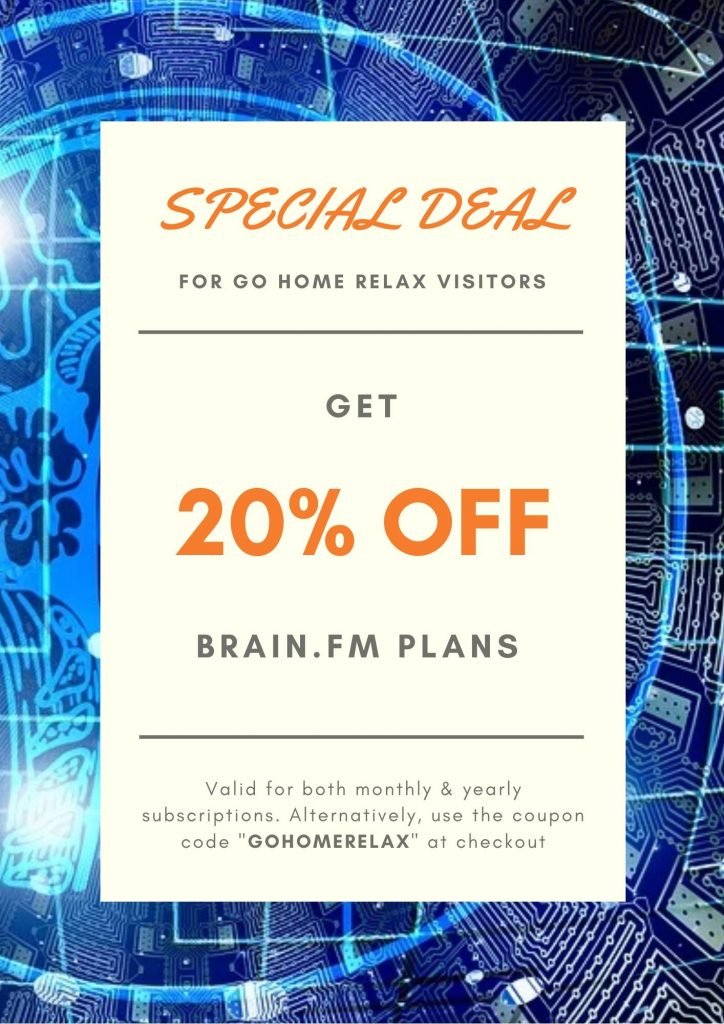 But, does Brain.FM really work?

Although there are no published peer-reviewed papers on this case, a team of neuroscientists did some pilot studies on it. Given that the studies are small-scale, with a small number of participants, the results should be taken with caution.

To prove if Brain.fm helps users focus better on their tasks, test subjects did the Sustained Attention to Response Task (SART) to Brain.fm, Spotify music, silence and noise. While doing that, their EEG (electroencephalography) was recorded. The EEG recordings showed that music by Brain.fm did have an effect on neural oscillations in specific regions of the brain associated with attention. This shows that Brain.fm can help increase focus in individuals, although it can vary.

Another pilot study shows an increase of staggering 27% in Slow-Wave sleep activity, which is the most important stage of sleep. That is the stage where declarative memories (lists, dates, events) are encoded. Most people have trouble reaching the slow-wave stage, thus feeling groggy the following morning.

In 2017, Brain.fm team got awarded the National Science Foundation Grant Award to help their ongoing research. Hopefully, in the near future we will have some solid evidence about the effects Brain.fm music has on certain regions of our brain.

From a more experiential point of view, users across the world rave about this app. It is still unclear whether it is just a placebo effect of you putting on your headphones and really deciding to work, or the app really works. A lot of people report increased productivity, better night’s sleep (pair it with the best headphones for sleeping) and even tingling feelings, so there maybe is something to it. It varies largely from a person to person. Some people use it solely for studying, because it annoys them while sleeping, others use it the other way around.

For that matter, individualized content generation feature is planned to be released soon, which will generate music individually, using user feedback and parameters.

Whether you have trouble sleeping, relaxing or finishing that tedious task – this app might just help you. People with more severe disorders, such as anxiety disorder, insomnia or depression should probably use it with precaution, after consulting their physician.

Bear in mind – the brain is a tremendously complex organ, that holds many secrets waiting to be revealed. Using music to “hack it” might be a long shot, but it may be worth a try – even if it turns out to be a placebo.

Looking for a special deal? Get 20% off your Brain.FM subscription by signing up here or enter the coupon code GOHOMERELAX when signing up.

Disclosure: Some of the links above are affiliate links, meaning, at no additional cost to you, we will earn a commission if you click through and make a purchase.